A Tale of Two Goblins 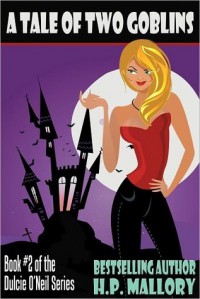 A Tale of Two Goblins was a delightful surprise and a great read!
The spunky, independent fairy is back and better then ever.
There is a Dreamstalker going after people that are connected to Dulcie, causing them to drop into a coma and eventually die, but when Dulcie’s best friend Sam falls victim the stakes are raised even higher. Teaming up with the sexy Knight once again it’s a race against time while things start to heat up in other matters, and not just because he is a Loki.

The first half of the novel moved a bit slow and I was worried that I’d have the same feelings for it as I did To Kill a Warlock. But by the second half of the book, what I found lacking in the first (romance, chemistry, character/relationship development) was more then made up for here, and by the end I didn’t want it to stop! And lawd, the way it ended was killer, just when we got to what I’ve been waiting for throughout these two books. Evil, evil author…
Plenty of action, mystery and suspense to keep readers entertained and the continuing sub plot of Dulcie’s writing a new paranormal novel adds a fun aspect to the story. The plot itself was good and really kept me guessing as to whom the villain was.

I still enjoyed the secondary characters more then the main character Dulcie, especially the love interest Knight, but Dulcie’s growing on me and I’m eagerly anticipating the next installment in this series. A fun quick read.
Tweet