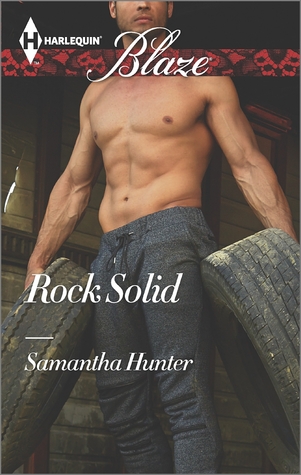 Champion stock car driver Brody Palmer's bad-boy reputation has forced him into early retirement. What no one knows is that his "retirement" is actually a publicity stunt. All Brody has to do is clean up his act and settle down. Unfortunately, every single woman with a pulse is now gunning to become the new Mrs. Palmer.

Hannah Morgan needs to shake things up, and Brody is the best way to do just that. So they strike a deal—a fake relationship…with all of the sexy strings included! Brody gets his improved image, and Hannah gets a whole lot more of Brody's unpredictable wildness. Hot days, hotter nights—it's the perfect plan! Provided, of course, they don't do something to wreck it, like fall for each other…

Crystal's Thoughts:
Rock Solid is a charming story about taking chances and finding love at the least expected time.

Brody Palmer is a race car driver who lights up the track with a fast and fiery reputation to match. But his sponsors are tired of the bad publicity he's been garnering lately and give him an ultimatum; retire for a season and clean up his image or loose his sponsorship. So Brody quietly retires to his family ranch. When the one woman who Brody ever found a connection with shows up at his door looking for adventure, he seizes the opportunity Hannah Morgan brings to give him a clean and wholesome image for his sponsors. But when their fake engagement becomes a little too real will Brody take the chance on something outside of the track?

Neither Brody and Hannah are looking for a relationship when they meet again after six months apart. Brody is trying to get his life and career back on track, and stock car racing is the only thing he has ever wanted to do. While Hannah is determined to reinvent her life from the boring one she was leading before with a new career and a new, take-chances attitude. But they have a past relationship and their is no denying the chemistry they still share. They restarted their relationship as a ruse to placate Brody's sponsors and ignite Hannah's photography blog traffic but it gradually turns into far more. There is lust and attraction from the start and Brody and Hannah quickly rekindle the flames between them but as feelings start to develop they each begin fight that connection for their own reasons. Hannah doesn't think that Brody wants a relationship or that she could ever hold his attention for long while Brody, in typical guy fashion, doesn't realize what is right in front of  him until it is almost too late. There are many ups and downs in the plot, some that are Bordy and Hannah's own making, and others outside of their control like nosy media personas, pompous publicists, and family drama.

While somewhat predictable, Rock Solid was a sweet story. The story-line did tend to drag in areas though and towards the end I found myself more interested in a secondary couple's story. Abby and Reece are best friends of Brody and Hannah and they have their own story in I'll Be Yours for Christmas which I will be checking out at a later date. All in all though, Rock Solid was a well-written, nice read without all of the angst that is common in today's romance world and some sizzling scenes that kept this reader happy.