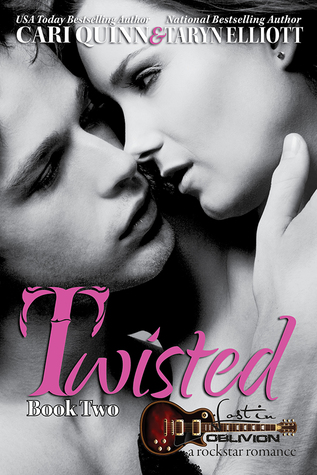 Gray Duffy never thought he’d end up as the co-lead guitarist of Oblivion, one of the hottest rock bands in the country. Even better? He's sharing the experience with his best friend, Jazz. Since the day she’d showed up as his family’s new foster kid, Gray has protected her. Loved her. And not just platonically either. After all these years of wanting her in his bed, he still doesn't know what it would be like to have her mouth on his.

Except for that one time. The time he’d shared her with Nick. The best worst night of his life.

Now they’re living their dream. They’re making music together and spending every waking moment trapped in tight quarters. With success at their fingertips, the time is right for him to finally make his move toward the woman he needs.

He just never figured he would lose control. Or that she would find out.

They’ve loved each other through everything. But what if this time love just isn’t enough?

Crystal's Thoughts:
Twisted is aptly named! It is a twisty, convoluted story of a forbidden love long denied only to be ripped from the couples grasp after finally being realized. Wow, what a gripping ride it was!

Oblivion just finished their first tour and are getting settled with their new label. They're set to start recording their next album but first their new manager wants them to take a writing retreat...in separate sequestered locations. And if they break the rules it could mean the end of their band. But Jaz has finally decided to take the plunge where Gray is concerned and being isolated from him is not going to work for her.

It has always been a case of wrong place, wrong time for Gray Duffy and Jasmine Edwards. First as foster siblings when Jaz had everything to loose, including the family she had always dreamed about. And then as band mates and friends, when in-the-moment decisions twisted already convoluted feelings. But Jaz is done letting life get in the way of what she feels for Gray. And nothing is going to stop her; whether it be well endowed drug dealers, snarky managers, unfriendly family members, or even Gray himself.

The story is told through alternating chapters of then and now, past and present which I thought gave a great insight to the relationship between Gray and Jaz. How it become, how it built, the hurdles they've overcome, and the deep-rooted connection between the two. There is no denying the chemistry between Jazz and Gray, then or now. I thought the authors handled the whole foster-sibling issue with decorum and it didn't come across as weird or anything, which having foster and adopted family members myself I was a little worried about. ☺ When Gray and Jaz finally gave in to that chemistry the pages sizzled! I loved seeing these two finally together because they were so gosh darn perfect. Cute, sweet, funny and downright sexy.

The future of Oblivion is on a razor sharp edge though and if these band mates can't get their act together the label, a.k.a. their bull-nose manager Lila, is threatening to drop them or even replace them. And unless Gray can manage to clean up his life and right the decisions he has made it could cost him not only his band, but his girl too, and maybe even his life. Twisted had everything that you could imagine a story centered around rock stars having. Drugs. Sex. Danger. Rock & Roll. Lust. Love. Angst. Anger. Drama. I am on tenterhooks waiting for Nick's story now, his sexy surliness captivated me from the start. It's going to take all of my patience to hold out until book four, Shattered, though. Wah! I can't wait!