#Review: Dragon Her Back by Susannah Scott - 4.5 Wine Glasses 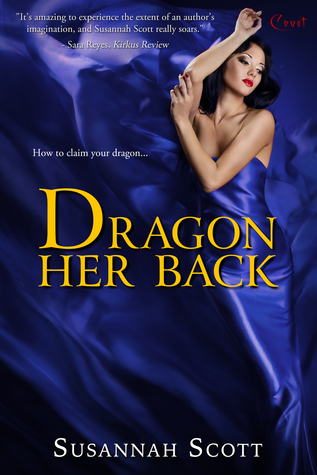 How To Claim Your Dragon...

As the head of security of Vegas's Crown Jewel casino―and its hidden dragonshifter sanctuary―ice dragon Darius Dachien commands respect. Unfortunately, that respect isn't always reciprocated. In fact, when it comes to the stunning Mei Chen, hostility might be a better word. Which makes things even harder for Darius, since Mei is his dragon mate. Without her, his dragon form is fading fast... and once lost, will be gone forever.

Mei can't deny the fierce chemistry that simmers between them. If Darius were ever to discover who―or rather, what―she really is, she wouldn't just lose him, but her place with the dragonshifters. The moment Mei's past comes crashing into her present, she realizes her time for secrets has ended. Now she must reveal her true self... and risk both her life and her heart with the one man who could destroy her.

Linda's Thoughts:
“She'd just gone ice princess on him. As an ice dragon himself, he knew something about frigid.
Mei made frigid look like a balmy day on the equator.”

DRAGON HER BACK by Susannah Scott is another winner in Susannah's Las Vegas Dragons series! DRAGON HER BACK is the third installment in the series and shares interconnected characters with the previous books, but it could easily be enjoyed as a standalone, if that's your preference. However, I highly recommend reading the entire series in order because each of the books has been copiously creative and highly entertaining. The books in the series to-date and in order are:

I confess that I'm kinda' in love with her heroines and I seriously love her dragons.

If you have been reading the books, you are acquainted with both our hero and heroine in DRAGON HER BACK as they've appeared in the previous books. Mei has been giving Darius the cold shoulder for six years, even though it's well known that she's his dragon mate. Without her, he's a goner. I'm glad they finally got their story told as it's a good one and we certainly don't want Darius to waste away!

I loved, loved, loved Darius Dachien, our hero. He's one of Alec's lieutenants at the Crown Jewel casino in Vegas in charge of security. Darius is a sexy, utterly swoon worthy ice dragon. He's an awesome lover, a talented gymnast, a smart security expert and just a seriously good guy! He knows what he wants - and her name is Mei. He's determined to finally win her over and, to that end, he's trying some new tactics. He doesn't want her, though, to come to him because he is waning, but because she wants him too. Little does he know that Mei is full of surprises - and has baggage he couldn't imagine.

I liked Mei Chen, our heroine, too. She's also a dragon, courageous and strong, but stubborn to a fault. There were good reasons for her maddening secrecy, though I wish she'd been honest with Darius much earlier. In her defense, Mei has led a rough life. When she was given her job at Vegas' Crown Jewel casino, she turned over a new leaf, and didn't look back. But her dark past has now come knocking; it's complicated and not pretty. Dragon politics and age old secrets will be revealed. The world as the dragons know it will be changed forever. The end of the road is in Mei's future and anyone close to her will suffer even worse consequences.   “She was screwed by the fates. Cursed with a mate she wanted but couldn't have.”

Following please find two of my favorite ooh la la quotes illustrating some of the hotness to be discovered in the pages of this book:

“He loved her lips. He could imagine them wrapped around his cock even now., leaving a red circle...a brand. A red brand on his cock.”
----

“You can lead if you want." He whipped them around so he moved backward, pulling her with him across the floor.
"You're still leading," she said.
"Perception is a tricky thing." He kissed the side of her neck, and shivers followed.
"I know one way to lead."
She dropped her hand from his shoulder to the band of his shorts, and slipped her hand in his waistband. He sucked in a breath, and her hand snaked downward. She stroked the length of him, feeling him grow hard and rigid.
"Mei." He pulled her closer...”

One of my favorite scenes occurred when Mei came upon Darius as he was working out in the gym. His workout evolved to a steamy his-and-her workout near the pommel horses. I enjoyed it as the interaction between the two rocked. There was scintillating sex, but also mucho humorous dialogue in which the two magically clicked. Following is a short excerpt from the end of that scene.

“Best workout ever." Darius sat next to her and rested his back against the soft mat.
She laughed and fumbled to put on her bra. He lifted the weight of her hair from her back and helped her pull down her silk shirt.
For a moment, he held the length of her hair in his hand as he had the swing rope. He tugged gently to turn her face to his, and then released it. His face was open and relaxed, his pale blue eyes warm and content.
His knees fell open to rest against hers. The feel of skin on skin, bone to bone, was easy, the most natural thing in the world. "Next time we should try the pommel horse."
Mei laughed. "You still got pommeling on your mind?"
"Oh yeah." He signed and tilted his chin to the ceiling, exposing the length of his throat. "Some pommeling and tumbling would be good. We've got time to make up for.”

Susannah's writing is first-rate, as always. The world she has created of dragon shifters running a casino in the heart of Las Vegas, hidden yet in full view, is an original masterpiece. I enjoyed reading Darius' and Mei's story. It was a page-turner, for sure, with touches of mystery, dashes of humor and a steamy romance! It's a must-read for fans of the series.  I highly recommend DRAGON HER HEART AROUND to anyone who loves action-packed, steamy paranormal romances!